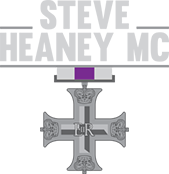 © Steve Heaney MC -
Site made by No Bull Agency

Below you will find details of books written by Steve Heaney MC. Both books were Sunday Times bestsellers and are available for purchase today

OPERATION MAYHEM – Is the first ever account of a truly epic elite forces mission: one of the most highly decorated in modern military history. Airlifted deep into the heart of the African jungle in the midst of a bloody civil war, twenty-six operators from the secret British unit X Platoon were sent into combat against two thousand rebels being used as bait to lure the enemy into a decisive, do-or-die battle. High on blood-lust, voodoo and drugs, the rebels were notorious for their brutal savagery.

“It was people like Sergeant Heaney MC that I was thinking of when I said at my retirement parade on Horse Guards in London – if I have seen further than most, it was because I stood on the shoulders of giants. If you don’t know what I mean, read this book and you soon will.” 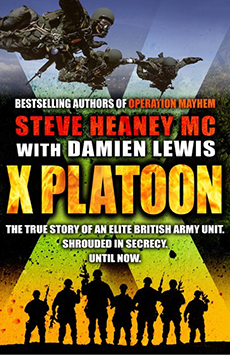 X PLATOON – For years it was run on the black economy, its operators kept off the books? Now, for the first time ever a highly decorated veteran who served for over a decade with the unit reveals the secret history of X Platoon. From counter-narcotics operations in Central America to hunting war criminals in the conflict torn hills of Kosovo to being sent into battle against the Russian military elite. Steve Heaney reveals an untold story that will take your breath away.

“The story is told from the vantage point of a consummate professional, who took the fullest advantage of the challenge and opportunity offered by the Army, and in so doing shaped the future of the Pathfinders, as we know them today. It’s told by a very special bloke with typical humility.”